On Friday 4th October, we participated in the ISA Triathlon event held at Woodlands, Hutton. All the children had a great time and performed very well. Both the girls' and boys' teams came fifth out of 24 schools.

Our best individual results were Joseph Mikolajczyk finishing in second place out of approximately 130 children and Rosie Quirk who came in 8th place.  A superb performance by the two year 5 pupils.

Congratulations to all the children for their achievements at our annual sport's day.  The winning team was St. George.  Thank you to all the supporters that came along on the day to encourage and cheer for all the competitors.  Also thanks to the PFA for providing the refreshments and Mrs Halford for presenting the trophy. 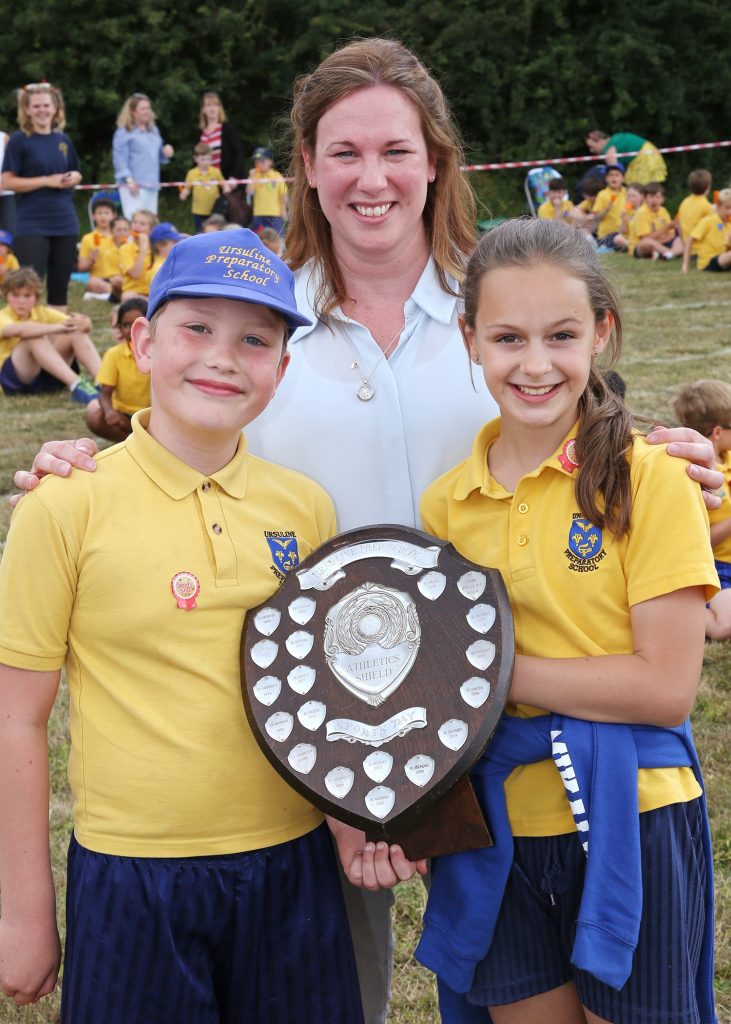 On Friday 24th May, nine children from Upper One went to Great Warley, Woodlands Primary to compete in the Year 6 District Triathlon Competition. The children had to complete 80m swim, 600m cycle and 600m run as part of the race. All the children performed fantastically and had great success both individually and in teams.

All the children enjoyed the event and it certainly served as good practice for the coming years!


Well done to everyone involved!

On Friday 5th October the school entered a team in the National ISA Triathlon event which was held at Woodlands School in Hutton.  The children swam, cycled and ran very well.  The final result out of the 23 schools that entered was 3rd place for both the girls' and boys' teams.

On Monday, 2nd July, we held our annual sport’s day competition. The children had a great afternoon with all of them competing their hardest for their particular house. The final results were 1st St. David’s, 2nd St. Patrick’s, 3rd St. George’s and 4th St.Andrew’s.  Mrs Heighton, Chair of the PFA awarded the shield to the winning team. 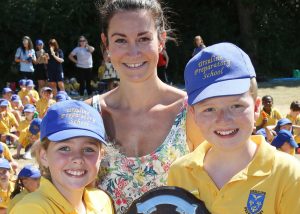 On Friday 6th October, the school participated in the ISA Triathlon held at Woodlands School, Hutton. All the children had a great time and performed very well. The girls’ team managed to come eighth out of 20 schools and the boys’ team came 6th out of 20 schools.

The event was combined with the District Triathlon, which was postponed from September due to a lack of schools entering. The results were girls’ team first and the boys’ team second. There were 116 competitors in the girls' event and 100 competitors in the boys’ event. Top placed Ursuline pupils were Ethan Aronowicz 11th and Emilia Hardy 12th. 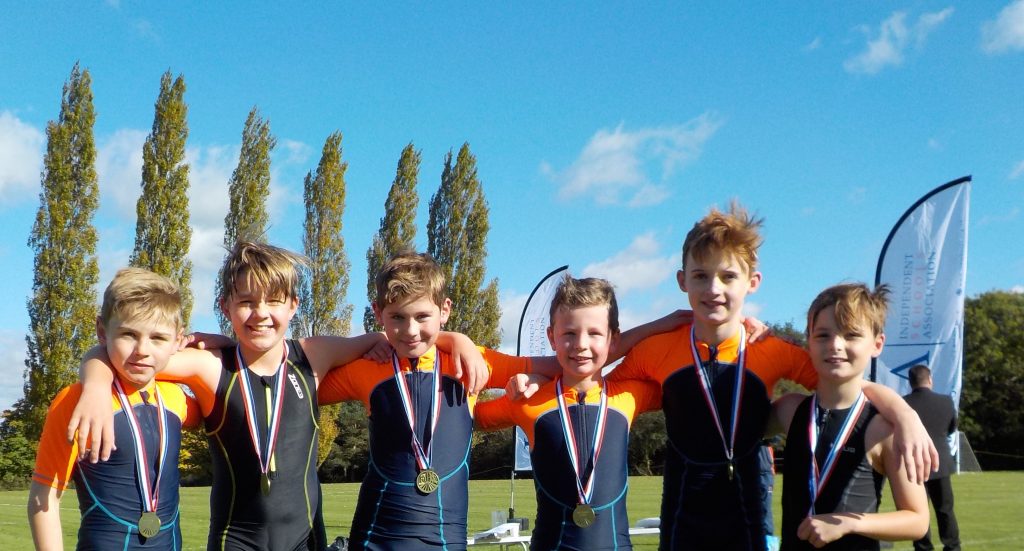 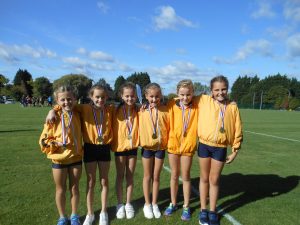 On Monday, 3rd July, we held our annual sport’s day competition. The children had a great afternoon with all of them competing their hardest for their particular house. The final results were 1st St. David’s, 2nd St. Patrick’s, 3rd St. George’s and 4th St.Andrew’s.  Mrs Herbert, Chair of the PFA awarded the shield to the winning team.

A team of  8 athletes travelled to Woodlands School to compete in this event.  It was very well organised and the children thoroughly enjoyed the event.  There were 15 schools competing and 89 competitors. The girls' team came 4th overall and the boys' team 8th.   Visit the Gallery to see more photographs taken at this event.

Sports day is the event where every child within the school can participate in both running and obstacle races.  Children from Pre-reception to Upper Two represented their house and enjoyed the afternoon.
St. David's finished the event with the highest number of points but all the children should be proud of their achievements.  Miss Welcome presented the house shield to St. David's house captains.  Many thanks to Mr Lewis for organising this event. 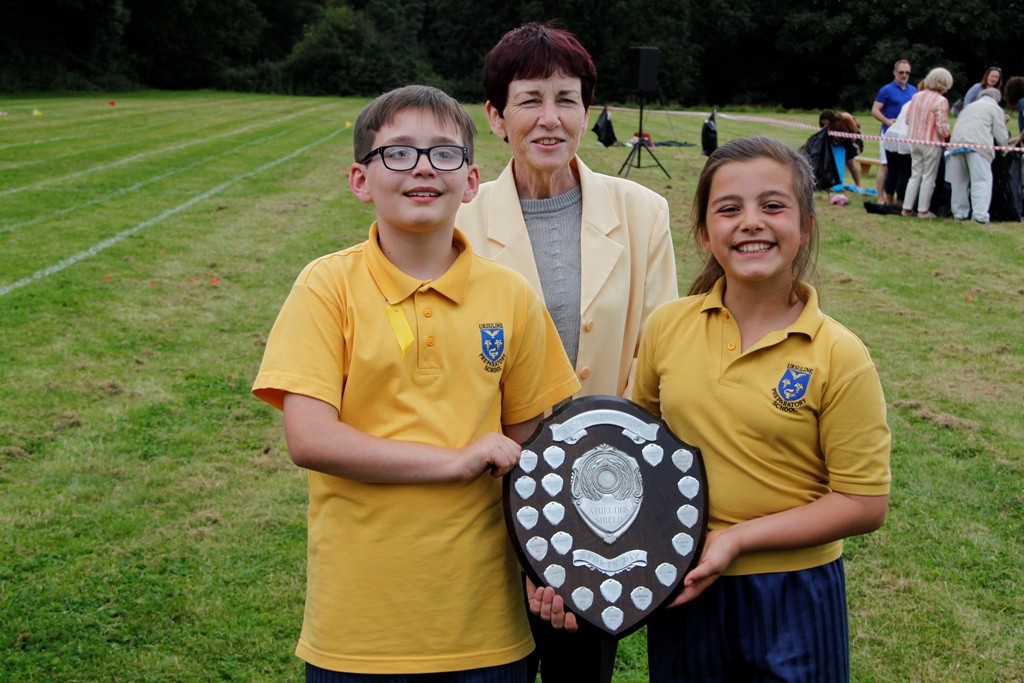 On Friday, 17th June, we participated in the Brentwood District Triathlon held at Woodlands, Hutton. All the children had a great time and performed very well. The girls’ team managed to come 2nd out of 11 schools and the boys’ team came 8th out of 11 schools. A special mention to Claudia Moore who came 1st and is now the Brentwood District Triathlon champion.

On Thursday, 28th April, we took a mixed team from Upper and Lower 2 to the ISA Tag Rugby tournament at Woodlands, Great Warley. All the children had a great time and played extremely well. We won the trophy 5 - 4 in the final and were crowned ISA champions! 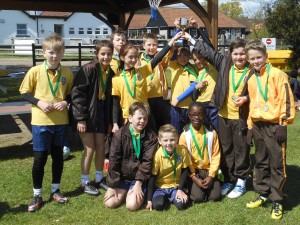 Sports day was postponed this year due to rain but it was the an excellent decision as on 9th July, reserve date, the sun shone and the school community enjoyed a beautiful sunny afternoon.  Children throughout the school participated in, obstacle and running races, from Pre-Reception to Upper Two, gaining valuable points for their house.  The final places were as below.

Please see pictured below Mrs Larrett with the winning house captain's, the team of St. David and a group picture of the children.  Official photographs will be available from Catchlight Photography in due course. In order to promote healthy living and personal fitness for all Upper Two enjoyed a very active day on Thursday with a personal trainer.  They looked at diet, food content and use of exercise.  They all learnt a great deal.

On Thursday, 2nd October, we entered a Triathlon event held at Woodlands, Hutton. The children had to complete a 90m swim, 600m cycle and finally a 600m run. It was an excellent competition both from the organisation and the weather. There was a separate race for the boys and girls; the team event was the first four competitors across the line and there was also an individual event. All the children did extremely well and really enjoyed themselves. The final results were: