Visit the Gallery to see in pictures how the film was made!

The idea for Rock on Cinderella started at least 4 years ago, thinking about all the experiences I have had putting on a show at the theatre, using the magic of pantomime while writing parts for 40 children and support roles for another 140 budding stars! I had originally planned to stage our production at the Towngate Theatre and I had already spoken to the staff there about the special effects we could use and sets that would dazzle.

However, Covid19 changed plans drastically as the Towngate became a vaccination centre, children were not allowed to sing and children were placed into bubbles and social distancing had to be adhered to! Determined to see it through, children were auditioned in small groups, zoom rehearsals took place throughout lockdown and a new location was needed to stage our show.

The story is about 2 brothers whose father died leaving a property development company to the eldest son (Don Prince), and a failing theatre to the youngest (Edward Prince). The theatre is prime development land which the eldest brother is keen to get his hands on. He sends a spy into the theatre (Ella) to make the theatre fail. Ella arrives at the theatre and suddenly realises that her step-mother and sisters already work there and they threaten to tell all to Edward. In an effort to save the theatre Edward puts on a show called Rock on Cinderella with the help of his accountant Ernie and new secretary Ella. With a blown up fairy, collapsing stage, cancelled insurance and tricked into a contract with Don, it doesn’t look good but suddenly Edward’s luck changes.

It would not have been possible to make this show without the help of Jacob Macdonald who was the main cameraman and editor, also Dennis Litjens who has helped with graphics and IT support. In addition, Andy Maloney and Melanie Robinson who kindly let us take over their property for filming.

Children have been filmed at school using a green screen and then groups edited together. We have been careful bubbles were not crossed and all singing was dubbed so it is not live with the exception of the choir who were filmed in small groups outside!

The school production was based on a traditional tale but given an original Parker-Litjens twist- emphasising good conquering evil, the value of true friendship and creating dreams. Using the house, church and grounds of Little Easton Manor, Near Great Dunmow as our location - you have our exciting new production.            Mrs Parker-Litjens

In a brand new story created and written by Mrs Parker-Litjens, we are following the fortunes of “Edward Prince” who has been left a failing theatre desperate to put on a production of “Rock on Cinderella!” Edward’s elder brother is jealous that Edward has been left the theatre by his father, as he wishes to demolish it and build a housing development on the site, so he sends a spy called “Ella” to work as a secretary at the theatre to create havoc and mishap.  As in all good plot lines there are many twists and turns on the way. Staring all the children throughout the school, it will be filmed at school and on location at Little Easton Manor.

Auditions started straight away in Sept with U2 and L2 auditioning for speaking and dancing roles. We started documenting our progress with short video clips to help the children getting used to being filmed and hopefully given everyone a little insight into our progress as we journey together towards our final goal!

The daunting job of filming and editing the show will be the task of Jacob Macdonald, Mrs Macdonald and Dennis Litjens.  Directed by Mrs PL, choreography by Mrs Mongelard and Mrs Walsh.  Admin and costumes coordinated by Mrs Cutbill.

Every two years we hold our School Production in which all children in the school take part. This is a climax of rehearsals, drilling and practising over a whole year and long practices for Lower Two and Upper Two children on Thursday nights and some rehearsals that are held on Saturdays.

This year the title of our show was Robin Hood written especially for the school by Mrs Parker-Litjens who also produced and directed the show. She was supported by the “Show Team”, which included Mrs Mongelard who directed the choreography, Miss Sharp and Mrs Gallagher who assisted and Miss Allen who arranged and organised the head microphones and also assisted with choreography. Thanks also goes to Mrs Ryan for the green screening, visuals and beautiful program, Mrs Cutbill for her endless administrative assistance and beautiful costume designs and creations!

The children were outstanding! They showed true professionalism and steady confidence on the stage. All children in Lower Two and Upper Two gave exceptional performances showing character development, dynamic and energetic dancing, stage presence and comic timing- holding the audience in their hands!

Children in the Pre-Prep Department charmed everyone with their singing in their sparkly costumes. Intermediate gave cheeky performances as vegetables, Transition were delightful waiters and waitresses directing everyone with their wooden spoons, Lower One beckoned everyone to the County Fair and Upper One nearly took the roof off the theatre with their hero dance and Proud Mary!

Visit the Gallery to see the rehearsals photographs for this event.  Official photographs of the live performances will be available from Bardel Photography in due course.

On Monday 9th July the School Theatre Club delighted children, staff and parents when they performed their version of the Alice in Wonderland in the new school hall. The children had been rehearsing since October. They took on the roles not only of the actors, but as stage crew, set designers, wardrobe and prop mangers.

It was a great success!  Visit the Gallery to see more photographs from this performance. 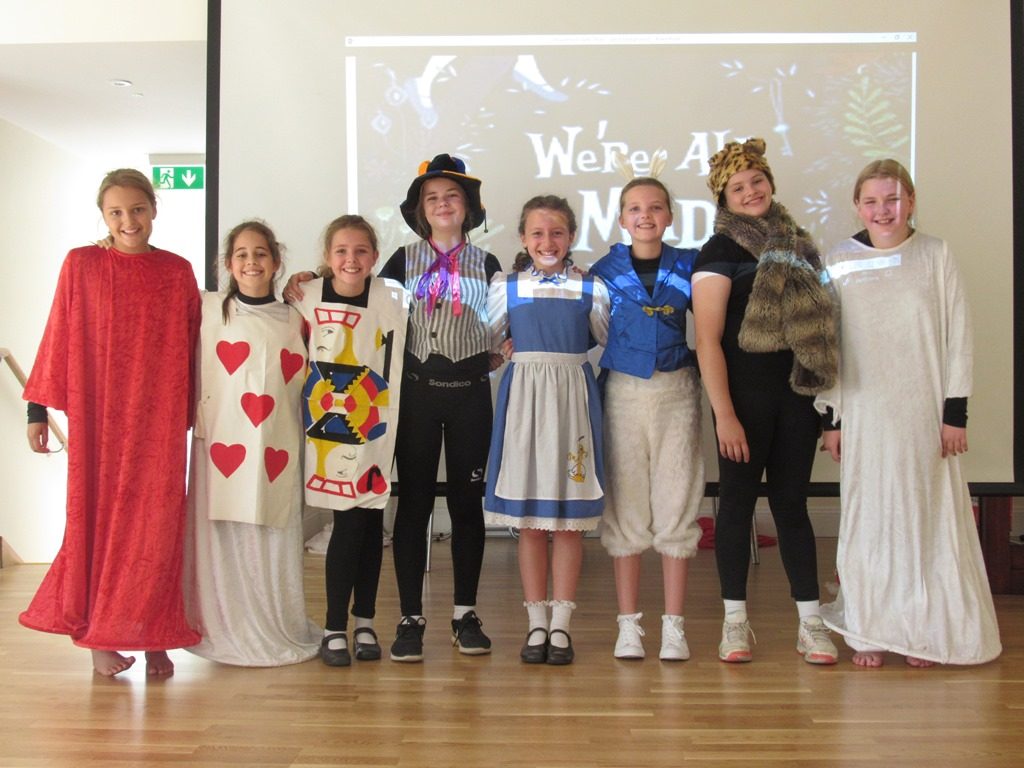 Sinbad the Sailor is the exciting Drama Production for 2017.  It will be held at the Towngate Theatre, Basildon on the 11th and 12th of July.  Sinbad the Sailor is the hero of The Thousand and One Nights which recounts his adventures on seven voyages.  The stories of his travels were based on the experiences of merchants from Basra trading under great risk with the East Indies and China.  The original story recounts him being marooned or shipwrecked after he sets sail from Basra with merchandise.  During a voyage filled with adventure and danger Sinbad goes from prosperity to loss and through a combination of resourcefulness and luck finds himself prosperous again when he finally returns home.

Every child in the school will be performing in this production which will be interpreted in true Ursuline Prep style  - emphasising good conquering evil, the value of true friendship and spirit of adventure!  The principle characters are pictured below. 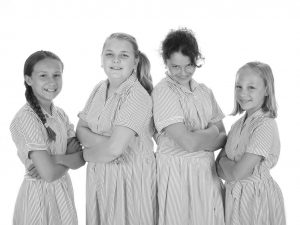 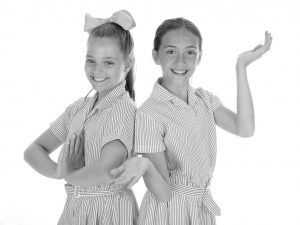 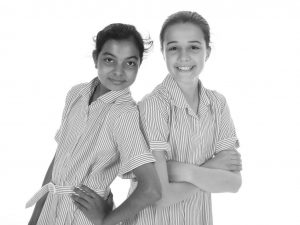 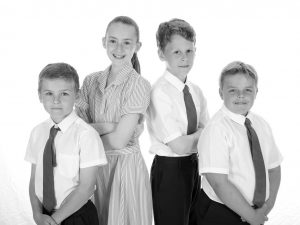 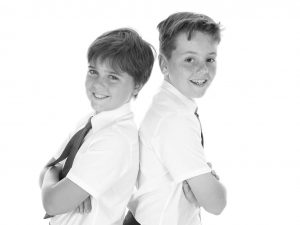 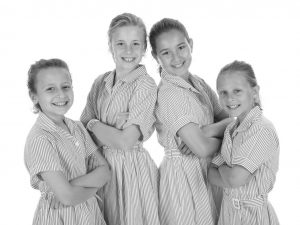 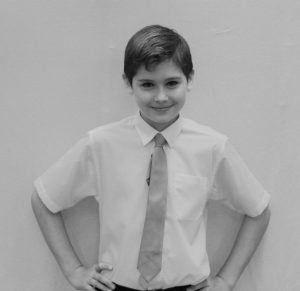 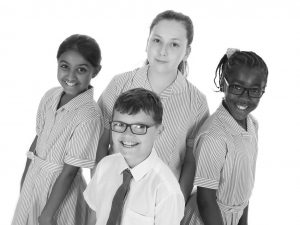 The School Theatre Club delighted children, staff and parents when they performed their version of the Wizard of Oz in the school hall. The children had been rehearsing since October (fitting in entrance examinations and interviews.)  They took on the roles not only of the actors, but as stage crew, set designers, wardrobe and prop mangers.

It was a great success and they fitted in three performances on Friday 20th May. 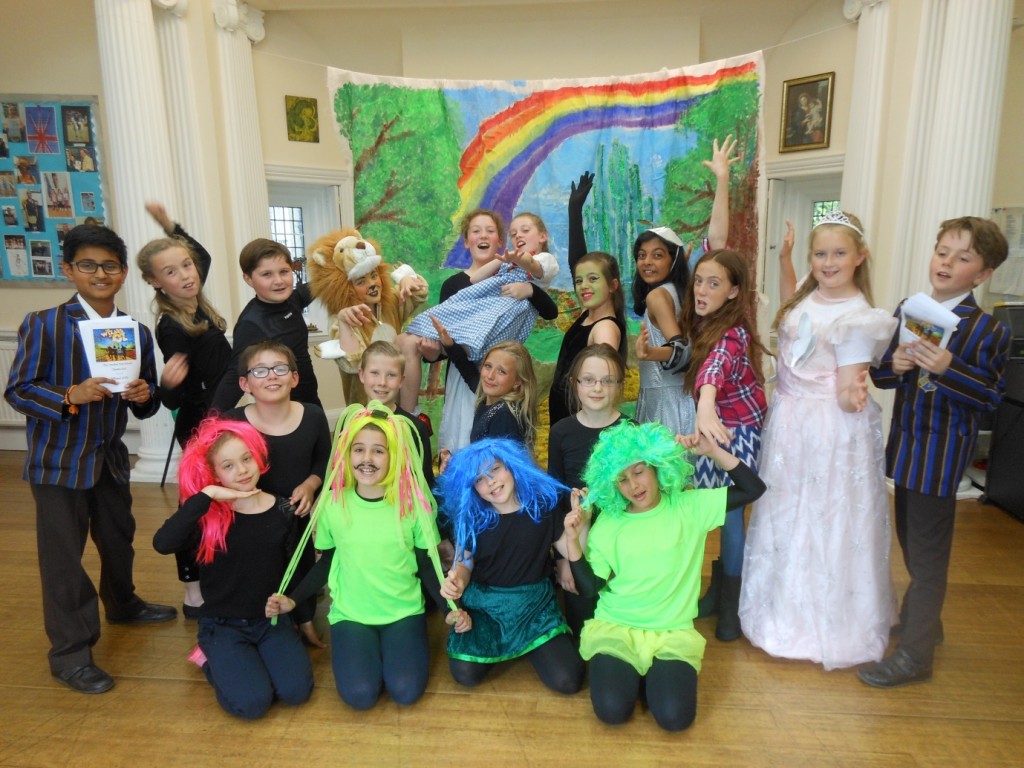 80 Days Around the World 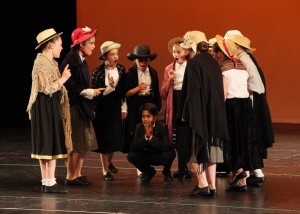 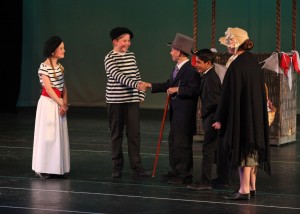 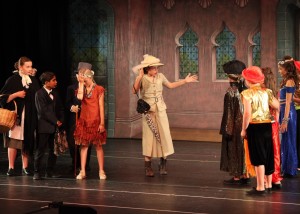 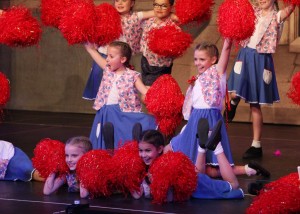 Click on the links below to see how Production Rehearsals are progressing!

The Lion Sleeps Tonight    Dancing in the Street

Rehearsals are in full swing for our school production “80 days around the World!” Tickets have almost sold out for Thursday. More will be available nearer the time.

Children are rehearsing long into early evening on the school playground on Thursday nights and costumes are beginning to appear outside classrooms.

If you haven’t got your tickets yet, please hurry! The PFA are bringing together the programme so if you would like to have an advert inside please contact Mrs Ward.

It all seems a long time ago since the names first went outside Mrs Parker-Litjens classroom but all children are practising hard. It’s going to be great show! 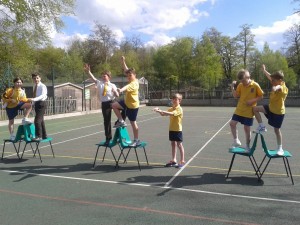 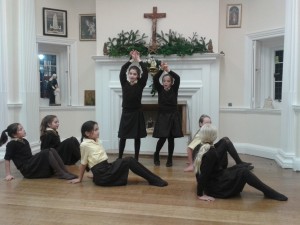 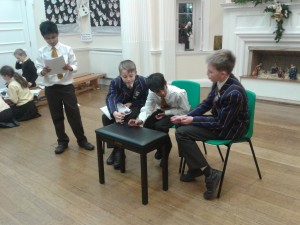 The 2014 school production has finally been revealed!  The children have been auditioning and in the week beginning 22nd September the parts were announced.

Please click on the link to see the Rehearsal Schedule for the Michaelmas Term.