After fundraising money to sponsor a hearing puppy, Intermediate and Kindergarten had a very difficult decision to make. They had to choose, which puppy of three, they wanted to sponsor.

This led to a democratic vote in true British style. The children watched a video/ pitch for each puppy, then had to make their decision before entering the polling station to cast their vote on a voting slip.

The children thoroughly enjoyed the experience – with the shock result of ‘Otto’ the golden lab being chosen as the children’s choice for sponsorship.

It generated lots of discussion about ‘fairness’ and the importance of everyone having their say (teachers included!)

We look forward to arranging the sponsorship with the Hearing Dogs charity and monitoring Otto’s progress. 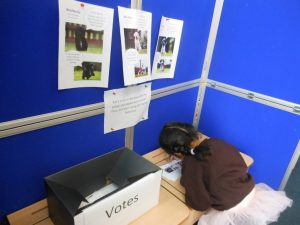 The Pre Prep department all took part in a Sponsored Dough Disco to raise money for the new school hall on 28th June. They danced non stop for 5 whole minutes without stopping and making shapes with dough as they danced. Thank you to all those families who generously donated money. The children all had great fun. 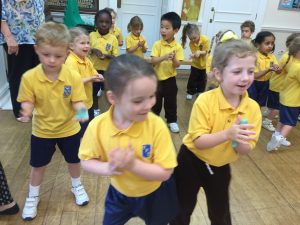 On the 23rd May Lower One and Upper One went to Namco Funscape Tenpin Bowling for their School Hall fundraiser.  Namco provided the school with free use of 8 bowling lanes and could not have been more helpful and welcoming.  The children competed in their houses and all really enjoyed the experience, having lots of fun.  In Lower One St. Andrew's house had the highest team score and in Upper One St. George's narrowly beat St. Patrick's in the team event scoring 425 to 423!  Please visit the Gallery to see action photographs from this event. Visit the Gallery to see individual photographs from this event. 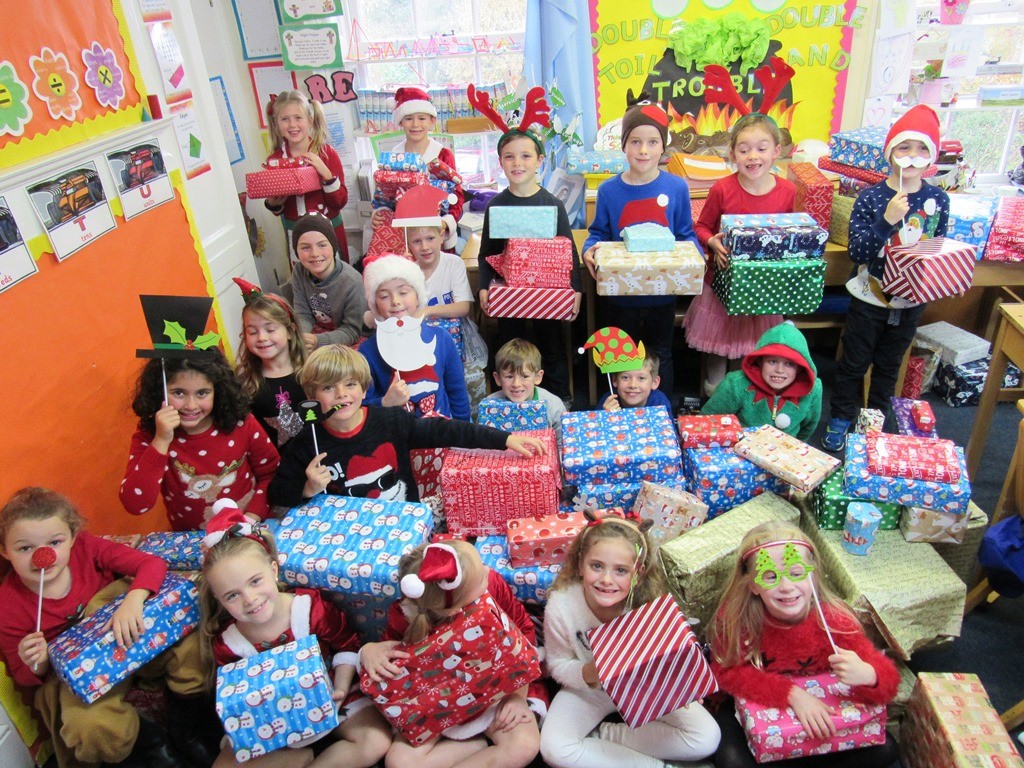 On Tuesday 15th November, Lower Two enjoyed their sponsored ‘Dress Up’. This entailed putting as many items of clothing, clothes and accessories as possible in 90 seconds.

The children got dressed in pairs, whilst the rest of the class shouted their encouragement. Each child had access to oversized wellingtons and Ursuline blazer; an unusual wig; an extra large shirt; ties, scarves and gloves.

As was intended, all of the children looked very funny when they had donned all of the available items! Lower Two, Mrs Geggus and Mrs Creavin had a lot of fun, and each child took home a photograph of their fundraising outfit. 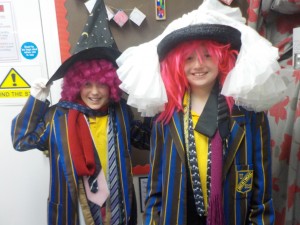 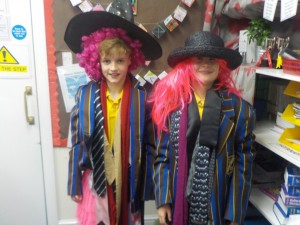 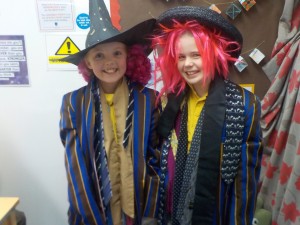 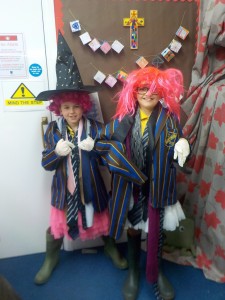 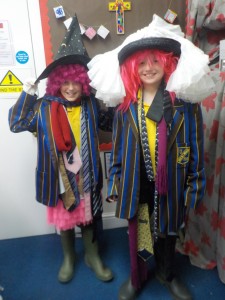 The children were allowed to speak at play times, music and PE. While the silence was taking place, they had to use sign language and wear a speaking hat if they wish to ask a question.

They did brilliantly! Although the experience was painful for some they all completed the challenge!

On Tuesday 8th November all the children in Upper One took part in a 'Bikeathon' which consisted of cycling for the whole day. Every child cycled for a solid 10 minutes.  Most of the children found this quite a challenge but everyone kept going, no-one giving up!  Their efforts raised the magnificent sum of Ł627.  Please visit the Gallery to see photographs from this event. 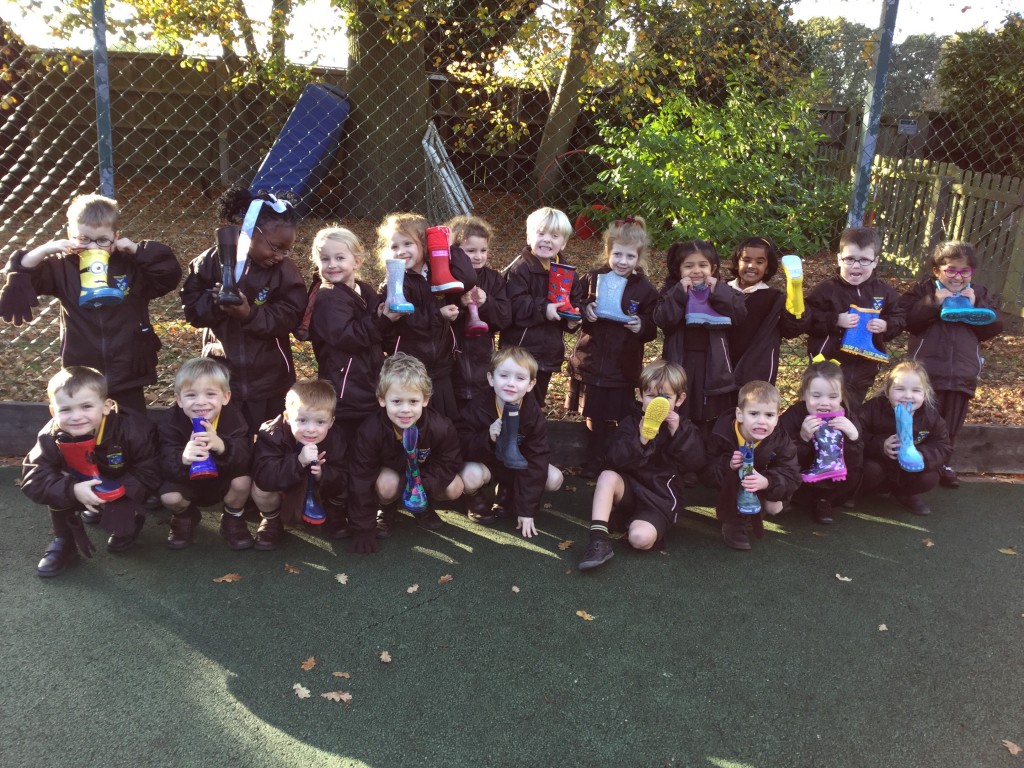 During the October half-term, Pre-reception children took part in a sponsored ‘Autumn Scavenger Hunt’. The children were given a sheet with different images to find, for example, a pine cone, squirrel and leaf.  All the children took part, supported by their parents and raised an amazing Ł670. 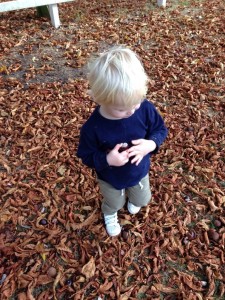 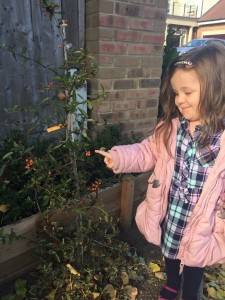 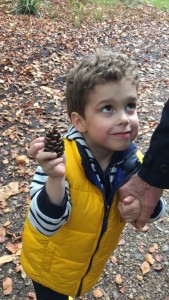